And we’re all more uncomfortable as a result.  See the rest of ‘em here.

Her name is Claudia Ochoa Felix, and she’s pictured on the left.  Despite her nickname “The Empress of Anthrax,” Kanye West is still more afraid of the real Kim Kardashian (on the left).  See more pix of their resemblance here.

I think I just found out #Kimye have returned from their honeymoon. @westwoodoneinc #powerofsound

…in the form of a white Batman costume.  Because of course. First of all, everyone knows that guests aren’t supposed to wear white to a wedding.  Second of all, you know you’ve crossed the line when the douchiest person in the photo isn’t Joe Francis.  (photo via Joe Francis’ Instagram)

Kim Kardashian and Kanye West got a Vogue cover, and everyone had a field day 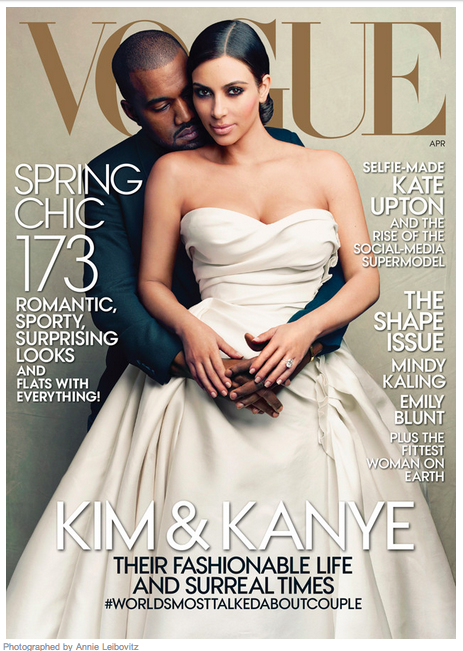 I’m not a fan of most of Kanye West’s music, but I recognize that he has some genuine talent as a lyricist and producer.  But nearly every time he speaks, he ridiculously declares himself a genius and/or puts himself in the same class as some true legends.  That’s not to say that Kanye isn’t (or is) a genius or a legend-in-the-making, it’s just to say that constantly proclaiming it is all kinds of douchey and cancels out any talent he might possess.

Long story short: Kanye tore apart a screaming fan who wanted him to take it off (his clothes and/or his mask, I presume).  And, in an extra-klassy move, he had he woman evicted from the show.  That’s right, Kanye West rewards his loyal fans by proving to them that they’re not worthy to experience more of his genius.

Thank goodness somebody caught the entire thing on video to show everyone how seriously out-of-control his ego has gotten.  Watch it above, but beware the language is NSFW.

Lady Gaga did a solid job hosting Saturday Night Live this weekend, but one of the best sketches really put the spotlight on Jay Pharoah and Nasim Pedrad as Kanye West and Kim Kardashian, morning talk show hosts.  Bonus points to Gaga for playing an Apple Store Genius (and for poking fun at her own obsession with fashion).